The Train Set by Steve Marsh 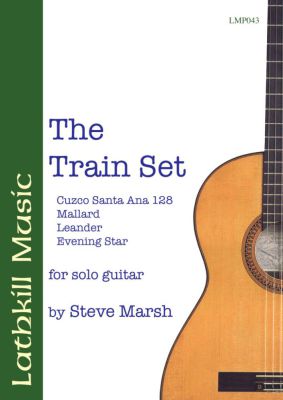 How to Purchase
This is a descriptive major concert work of four movements, each movement connected with the steam train era, and lasting approximately 30 minutes in total.

CUZCO SANTA ANA 128 is the opening movement. This composition tries to evoke the steam train journey which runs between Cuzco in Peru and Santa Ana in El Salvador, passing along the way the ruins of the magnificent Inca settlement of Macchu Picchu high up in the Andes. The number 128 refers to the number of one of the great German-built post-war engines which used to regularly travel this route.

MALLARD, the second movement, is one of the 'Pacific' class of locomotives and on July 3, 1938 it broke the speed record for a steam locomotive having reached 126 mph, a record it still holds. The Mallard is preserved and at the time of writing is kept in the York Railway Museum, England.

LEANDER is one of three preserved 'Jubilee' class locomotives built by the London, Midland and Scottish railway. The slow tempo and rather melancholic mood of this piece does not reflect the speed at which it was capable, instead it tries to convey the sadness at the demise of the ear when steam trains were once a part of our lives.

EVENING STAR, the final movement brings THE TRAIN SET to a magnificent conclusion in grand style. This piece, named after the last steam locomotive to be built by British Rail in 1960, is a work full of dramatic contrasts and is a definite audience-pleaser.

Although each movement could well stand on its' own in performance, the four movements should be played as a whole.

"This collection, while in many ways typifying the contemporary stylistic uses of minimalism, effectively blends a variety of musical styles in a highly creative way. An indisputable valuable addition to the guitar repertoire" - CLASSICAL GUITAR MAGAZINE