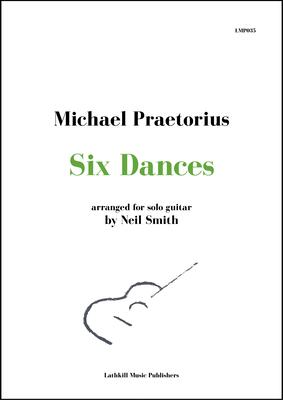 Here’s what Neil has to say about them…

“Originally set in four or five parts and, for them to work well, it has been necessary to reduce the texture somewhat. Players may wish to carry the reduction further and in such cases, the outer voices must be given priority. They may be played as a suite since I have set them in one key-zone, a device which did not always concern Praetorius. Three are well known and in these, I have added ‘Divisions’ which may be discarded or added to according to choice.”


Neil Smith studied with Duarte, Diaz and Brouwer and followed his London debut with a major tour of Europe and concerts under the direction of Sir Simon Rattle and Sir Alexander Gibson. He later toured across the USA and behind the Iron Curtain; in all, his voyages have taken in over 40 countries. In 1987 he played at the palace of the Duke of Brunswick, Germany where Praetorius, Dowland, Caroubel and others played and where Terpsichore was set down.