for flute and guitar 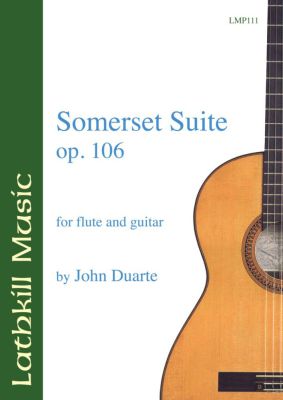 How to Purchase
A newly 'discovered' work for flute and guitar Somerset Suite op.106 by John Duarte.

Formerly known as Cannington Suite this newly-published work is based on Somerset folksongs, with some allusions to the Cannington Classical Guitar Summer School and the sounds of the guitar heard there.

It has four movements:
1) John Barleycorn
2) The Keys of Heaven
3) O Sally My Dear
4) The Cheerful Arn

"As with much of Duarte's work there are musical jokes and here he does not fail to include a musical guffaw. There is a simple beauty in the part writing for the flute and guitar from one of the foremost characters of the English guitar scene. In this peculiarly English setting, Duarte has created a series of settings that capture the calls of cuckoos, mysterious burial sites and the hunt, with a final departure fo the horns calling in the distance. Recommended ... the productions of Lathkill just keep getting better." - Classical Guitar Magazine 2006