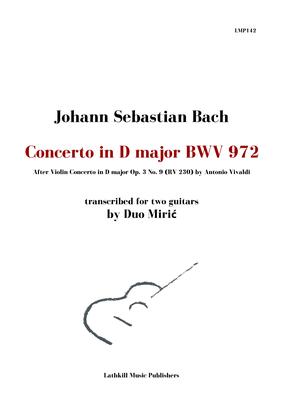 How to Purchase
Bach’s fascination with Vivaldi resulted in him transcribing a total of 10 concertos, and their publication in late 1800s was a major contributing factor to the twentieth century resurgence in Vivaldi's popularity.

Of the 7 Vivaldi concertos that Bach chose to rework for solo harpsichord, RV 230 is arguably the most famous and best loved.

Lathkill Music Publishers are proud to be able to finally make Bach's Concerto in D major BWV 972 available to guitar duos through this fabulous transcription for two guitars by Duo Mirić.

“This beautiful edition, ... a well-executed transcription of the original, ... musically impressive enough to interest professional duos, but the first two movements would be of interest to an amateur duo, and the final movement’s complexity is purely one of speed.” Derek Hasted - CLASSICAL GUITAR (FALL 2019)