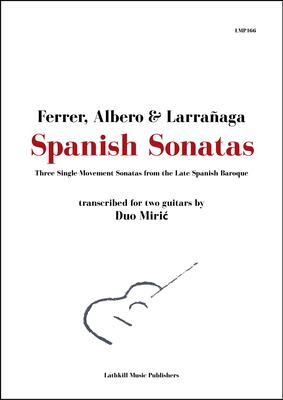 How to Purchase
Three Single-Movement Sonatas from the Late Spanish Baroque transcribed by Duo Mirić that meld the influence and legacy of Scarlatti, the unrivalled king of the sonata, with the sensibilities and temperament of the Spanish to create something rather special.

The first, Sonata in G minor by Ferrer, has a brooding quality; the second, Sonata no. 17 by Albero, has an avant-garde approach to dissonance; and the third, Sonata de 5 Tono by Larrañaga, is an absolute riot to play, made even more exciting by the use of string 6 tuned to low C.

The transcriptions have been made so that each player gets an equal share of roles, and the many repeated phrases passed around provide much scope for creating contrast on stage.

All three sonatas are individually beautiful, but the collection has been carefully chosen with keys and speeds that work together so they can be played as a continuous work to form a “Spanish Sonata Suite” or a “mega sonata”.