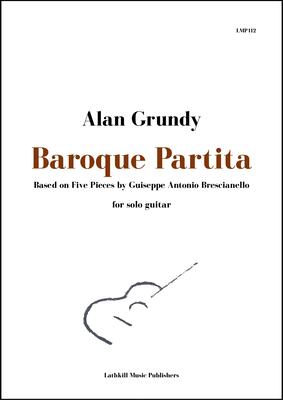 The Baroque Partita for solo guitar by Alan Grundy is a suite of five movements taken from four different Partitas written by the Baroque composer Guiseppe Bresianello and arranged by one of Dublins leading guitar teachers.

As Alan explains: “In studying Brescianello’s works, I found his standard of composition to be inconsistent. More often than not he begins a piece with interesting and fertile material worthy of many notable composers of the period, only to fail in its development and wander to an unfulfilling conclusion. On many occasions I wondered at the possibilities of his initial inspirations and out of simple curiosity I began experimenting with other developmental options. The Partita here is the culmination of these experiments and does not represent
any one of Brescianello’s original Partitas.”