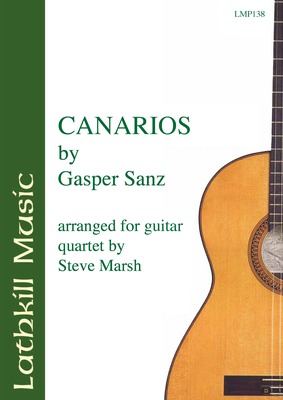 This is an adaptation of the celebrated dance by the 17th century Spanish composer Gaspar Sanz.

Although scored for four parts, this arrangement was written with a larger ensemble in mind, with several players doubling up on each part. It was first performed in September 2015 by the 20 students taking part in the Bakewell Guitar Ensemble weekend (directed by Steve Marsh) in Derbyshire.

10 pages - Full score and separate parts.
Includes permission for up to 4 additional copies of each part to be made, enabling the work to be performed by up to 20 guitarists.
Grades 4-7
£12 (book)
£8 (pdf files)
LMP138